My PhD thesis called ‘Making Visible’ was submitted in December 2013 and successfully defended on 12 June 2014. The thesis reflects upon the design material exploration research from the Touch and Yourban projects. It uses these explorations to situate design research with technology as a cultural, material and mediational practice:

In Making Visible I outline how interaction design may engage in the material and mediation of new interface technologies. Drawing upon a design project called Touch, that investigated an emerging interface technology called Radio Frequency Identification or RFID, I show how interaction design research can explore technology through material and mediational approaches. I demonstrate and analyse how this research addresses the inter-related issues of invisibility, seamlessness and materiality that have become central issues in the design of contemporary interfaces. These issues are analysed and developed through three intertwined approaches of research by design: 1. a socio- and techno-cultural approach to understanding emerging technologies, 2. through material exploration and 3. through communication and mediation. When taken together these approaches form a communicative mode of interaction design research that engages directly with the exploration, understanding and discussion of emerging interface technologies.

The thesis is made up of four peer-reviewed journal articles accompanied by a ‘meta-reflection’ document that reflects upon and situates these publications through theory, concepts and models.

This document develops the concept of mediational material that focuses attention on the material and communicative practices in interaction design. These are used to explore, develop and share knowledge of technologies as design materials. 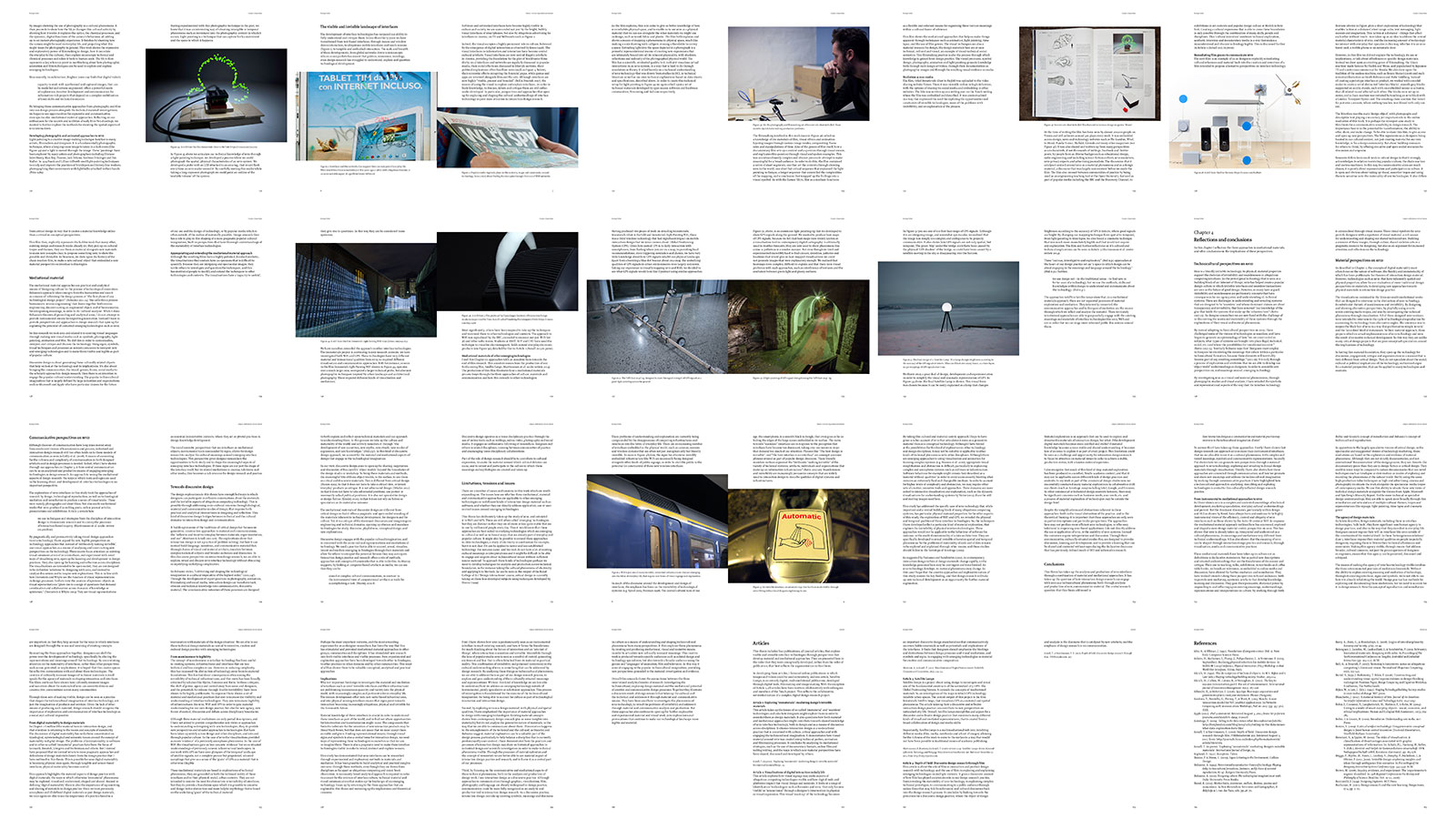 This document is 178 pages with 53 illustrations. I’ve made it available in a number of different digital formats:

It will also be available through AHO’s open-access archive ADORA.

The four included articles have been published in peer-reviewed journals.

This article takes up the issues of so-called ‘immaterial’ and ‘seamless’ technologies and asks how designers might explore them in order to consider them as design materials. It situates interaction design as a sociocultural practice that is concerned with culture, critical approaches and with engaging the technocultural imagination. It concludes by analysing its mediational strategies, such as the use of documentary formats, online film and weblog writing, and the ways in which new material perspectives have been shared, discussed and developed by others.

This article explores how visual signage may make aspects of ubiquitous computing technologies visible and how digital tools and platforms impact that visual design and semiosis. It looks at a range of ‘identification’ technologies such as barcodes and rfid, that only become ‘visible’ or ‘interactional’ through a designer’s intervention in physical or visual expression. It finds that designers should emphasize the bindings and distinctions between design processes and visual mediations, and symbols and signs, in engaging with emerging technologies as material for creative and communicative composition.

Satellite lamps is a project about using design to investigate and reveal one of the fundamental constructs of the networked city: GPS – the Global Positioning System. It extends the concepts of ‘mediational materials’ to an investigation of the ways in which GPS technology inhabits urban spaces. The article takes up how a discursive and reflexive interaction design practice can contribute to new perspectives on networked city life. Importantly, Satellite Lamps is a multimediational web text, involving different media (film, media, notebooks and a host of images) allowing for the richness of the work to come to the surface in a way that would not have been possible in traditional means of academic publishing.

This article is about the role of film in interaction and product design research with technology, and the use of film in exploring and explaining emerging technologies in multiple contexts. It concludes by looking towards the potentials for a discursive design practice, where the object of design and analysis is the discourse that is catalysed by new artefacts, and the emphasis of design research is on communication. 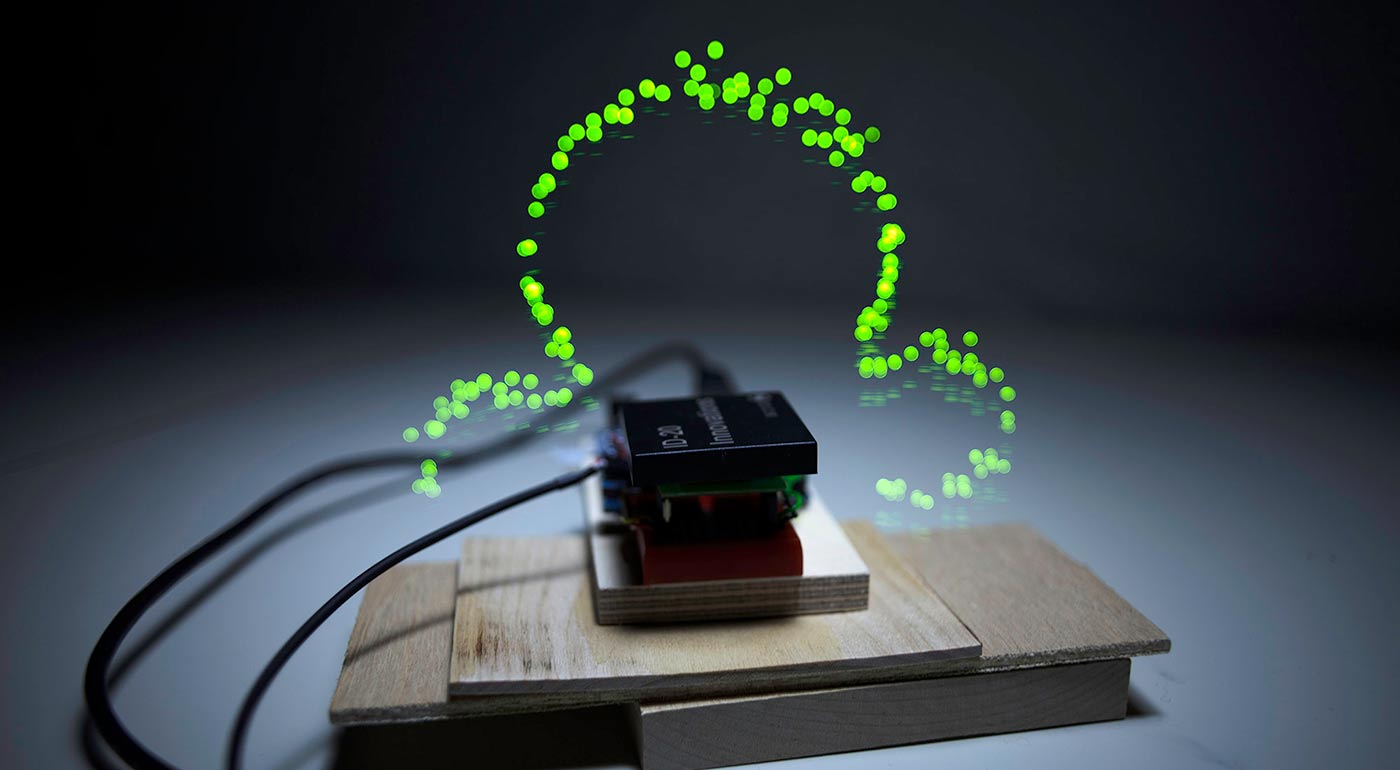 The Immaterials project is concerned with the increasing invisibility of interfaces and infrastructures. The systems we interact with everyday such as WiFi and 3G networks have a profound impact on how we experience the world. As Adam Greenfield says:

the complex technologies the networked city relies upon to produce its effects remain distressingly opaque, even to those exposed to them on a daily basis. […] it’s hard to be appropriately critical and to make sound choices in a world where we don’t understand the objects around us.

And as James Bridle has eloquently and disturbingly observed:

Those who cannot perceive the network cannot act effectively within it, and are powerless.

The project set out to expose some of the phenomena and mechanisms of technological infrastructures through visual, photographic, narrative, animated and cinematic techniques. Over the last five years I have worked with Einar Sneve Martinussen, Jørn Knutsen, Jack Schulze and Matt Jones towards a body of work that is now brought together in an exhibition for the first time.

From 2004–2008 I speculated about the ways in which wireless interactions inhabited physical space, through my work on a Graphic language for touch, and also through films such as Wireless in the world. Some of my students made beautiful but fictional speculations about the physical qualities of different kinds of radio.

Jack Schulze and I also made a short, playful film called Nearness about action at a distance. In the film, a series of simple reactions are set off by immaterial phenomena, such as radio waves, mobile networks, light, magnetism and wind.

In 2006 we ran a Touch workshop with BERG where we became concerned about the invisibility of RFID technology, and the effect that had on our ability to design with it. We found it extraordinary that a technology that was defined as a proximity or ‘touch’-based interface, was so opaque in terms of its physical, spatial, gestural materiality. How do we as designers make these materials visible, so we can have reflective conversations with them?

We developed Experiments in Field Drawing as a method of revealing, literally drawing, the physical presence of RFID interactions. We revealed these fields in a much richer, multi-dimensional way using photography, animation and light painting in the film Immaterials: Ghost in the Field.

Matt Jones coined the term immaterials to describe the project and gave a great talk about some ways of understanding the immaterials of interaction design. Matt and I also looked at machine vision, another phenomena that increasingly becomes a material for design in Robot Readable World.

In 2011 at AHO, as part of a research project called Yourban, we extended the investigations to WiFi, using similar light painting techniques we revealed the enormous scale and pervasiveness of ad-hoc WiFi networks in urban spaces in Immaterials: Light Painting WiFi.

Finally, over the last two years we’ve become increasingly interested in the Global Positioning System (GPS), that has become a central part of both the vision and the implementation of contemporary interfaces. 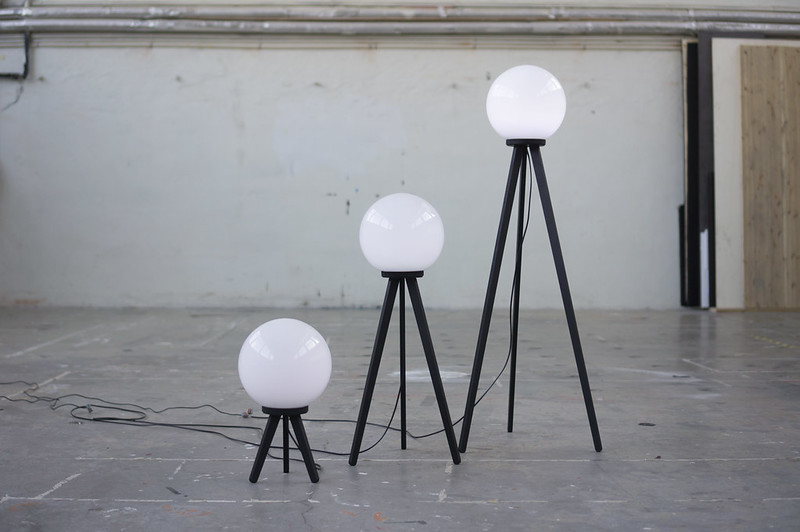 We have built a series of Satellite Lamps that sense the presence of the 24 GPS satellites in orbit. The lamps change brightness according to the strength of GPS signals they receive, showing how the technology itself is messy and unpredictable, and revealing how GPS is a negotiation between radio waves, earth-orbit geometry and the urban environment.

Satellite Lamps has so far been exhibited at Lighthouse and Dread, you can watch the film and read the extensive article detailing our process as well as a cultural history of GPS.

The visual languages that we’ve developed have ended up in advertising, on the BBC and Discovery Channel, and the techniques have been extended in research at MIT and CIID, and by many designers, enthusiasts and hackers. It’s exciting that both the subject and the methods are being taken up and used broadly by other people, and we’re looking forward to seeing more.

the truly pressing need is for translators: people capable of opening these occult systems up, demystifying them, explaining their implications to the people whose neighborhoods and choices and very lives are increasingly conditioned by them. — Adam Greenfield (2009)

The Immaterials project emerged from the humble preoccupations of a few designers dealing with some of the invisible, immaterial, intangible stuff we had in front of us. These small experiments led to larger and more visually and narratively communicative work. In the end what I think we’ve developed is an approach to technology that revolves around material exploration, explanation and communication. Because images and language, as well as materials, form our understandings of technology, Immaterials has shown how we can use ‘design and playful explorations to shape or stir the popular imagination’.

All the Immaterials projects are on display at Lighthouse in Brighton from 5 September until 13 October 2013.

Satellite Lamps and Robot Readable World are on display at Dread in Amsterdam from 7 September until 24 November 2013.