Some of our ambitions were:

Anne Galloway has posted our collaborative summaries from the workshop and my full notes are here, until they can be put on the collective server.

The discussion is continuing, and the next informal meeting of participants is happening at ISEA 2004.

It’s possible to use the “GPS Map 60c”:http://www.garmin.com/products/gpsmap60c/ in an old “Marimekko bag”:http://www.marimekko.fi in a mobile phone pocket just small enough that the aerial sticks out. In this way it can be placed in windows of buses or cars without it sliding around, and I can walk around without looking like a geek or getting mugged.

In short, GPS doesn’t work well in dense urban environments like most European cities. This is from the perspective of a pedestrian confined to the pavements (sidewalks) and public transport. From a few experiences whilst being driven around, it seems to work well in a car, probably because of the clear sky area available in the middle of the road. Inclement weather and green trees also seem to be problematic.

In these last few months, attempting to record a good quality database of tracks to geo-locate my photographs, I must have looked really odd. Face in device, stopping on street corners, stopping in the middle of street crossings and scrambling to grab the front seat of the bus. Discovering that GPS doesn’t just passively work is a great disappointment and my dataset is clouded with gaps and anomalies.

h3. Some other observations

* Fast turns when using public transport or car result in wild deviations: re-aquiring satellites is the problem
* Need a road that aligns with at least 4 satellites to get an acceptable track, anything else and the errors can accumulate
* Glass buildings can result in ‘reflections’ of position, eg jumping to other locations due to reflected signals
* I sit on the outside or front of buses: to get a wider expanse of sky area: I am constantly aware of sky cover
* The relative position of satellites is beginning to have an effect on the side of the street that I walk on
* Walking in the middle of the street: had a couple of near misses with cars – the moving map is just too engaging
* I would like an explanation of the lost track calculations: this device seems to use the last-known bearing and velocity to guess new tracks when the signal fails. This is very unreliable and problematic as it fills the map with phantom trails
* The track can be more useful over time than the (base) map: it shows my personal space and personal routes, I know where I have been and can use it to retrace routes or places. Popular routes build up in blackness and thickness. Home area becomes an abstract scatter plot of routes, but it’s very familiar
* Stored waypoints are really useful for getting large, general bearings on location: zooming out and seeing a relationship to two known landmarks can be really useful in an unknown area

!/images/urbangps01.jpg(GPS receiver resting on the top deck of the number 4 bus, London)!

!/images/urbangps02.jpg(GPS receiver in the window of a train, Oslo)!

Information Appliances and Beyond

Eric Bergman ed. One of the best interaction design books to date. With case-studies on various design problems from Palm OS usability to Nokia contextual design issues. Just enough detail and anecdotes to get a good sense of design process.
amazon.co.uk / amazon.com

Jef Raskin. An absolutely essential book for anyone developing an interactive product. Raskin explains some excellent ideas for usable interfaces that are better suited to large file systems and the internet.
amazon.co.uk / amazon.com

Kevin Mullet, Darrell Sano. A useful book with plenty of visual examples on how to simplify and enhance desktop interfaces.
amazon.co.uk / amazon.com

Jessica Helfand. Plotting the history and design of information wheels, those interactive tools that can tell you the cooking time of an egg to the blast radius of a nuclear bomb.
amazon.co.uk / amazon.com

The Art of Human-Computer Interface Design

Terry Winograd. A dialogue around the design process in software development.
amazon.co.uk / amazon.com

The Inmates Are Running the Asylum

Alan Cooper. Really good ideas to solve common interface design issues. Cooper shows that the biggest problem in interaction design is that it is controlled by the developers and programmers, and advocates the need for interaction designers at every level of software production.
amazon.co.uk / amazon.com

Apple Computer. The original guidelines for developing MacOS GUI interfaces. The version for MacOS X can be downloaded from apple.
amazon.co.uk / amazon.com

Notes on the Synthesis of Form

The Nature of Order

The Timeless Way of Building

Emergence: The Connected Lives of Ants, Brains, Cities, and Software

Small Pieces Loosely Joined: A Unified Theory of the Web

Smart Mobs: The Next Social Revolution

The Death and Life of Great American Cities

A New Kind of Science

Life on the Screen: Identity in the Age of the Internet

Community Building on the Web

Towards a New Architecture

The Logic of Architecture

Mobile: The Art of Portable Architecture

The Poetics of Space

Mess TV runs every night from around 2am until 12 noon the next day. Television is an effective way of communicating in Norway where the population is distributed evenly across a wide geographical area. The show is used by a variety of communities and individuals needing to connect.

I completely rebranded the show with a visual design that reflected the branding guidelines of TV Norge, refined the SMS and MMS interaction scenarios, and advised on linear broadcast and interactive content. 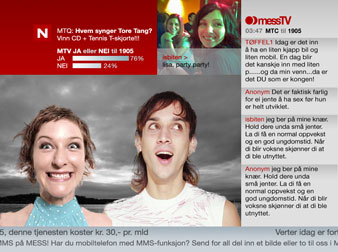 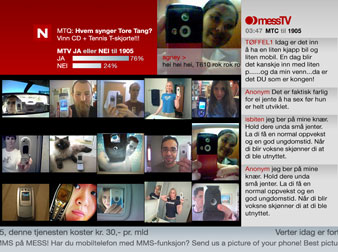 * The show has a standard layout, similar to other SMS television shows, but with a high attention to detail and clean, compact layout
* clean background colours foregrounds the messy user-generated content
* simple use of fonts and colours to lessen the visual overload of multiple messages
* clear divisions between different areas of content
* MMS pictures can be submitted and displayed as part of competitions or themes

We conducted specific audience analysis on themes and content that generated most interest, and adapted the interface to audience demands.

* Location based services, personalisation and competitions
* MMS video diaries: ability for the audience to submit diaries of community projects or daily life, and to allow for some editorial control over editing and presentation, perhaps through an online interface 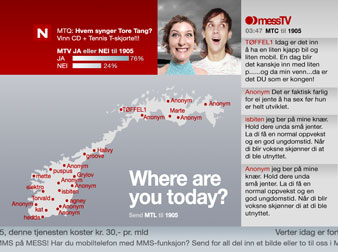 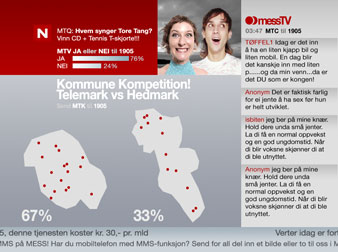 The Visual Display of Quantitative Information

Double Fold: Libraries and the Assault on Paper

How to Lie With Statistics

The Atlas of the Future

The State of the World Atlas